For 70 years, Heras has been meeting and exceeding the security needs of customers across Europe. It is this track record, together with the continuing growth of our employees’ skills, that allows us to call ourselves experts in perimeter protection. To mark our 70th anniversary, we look back at the development of Heras since 1952. 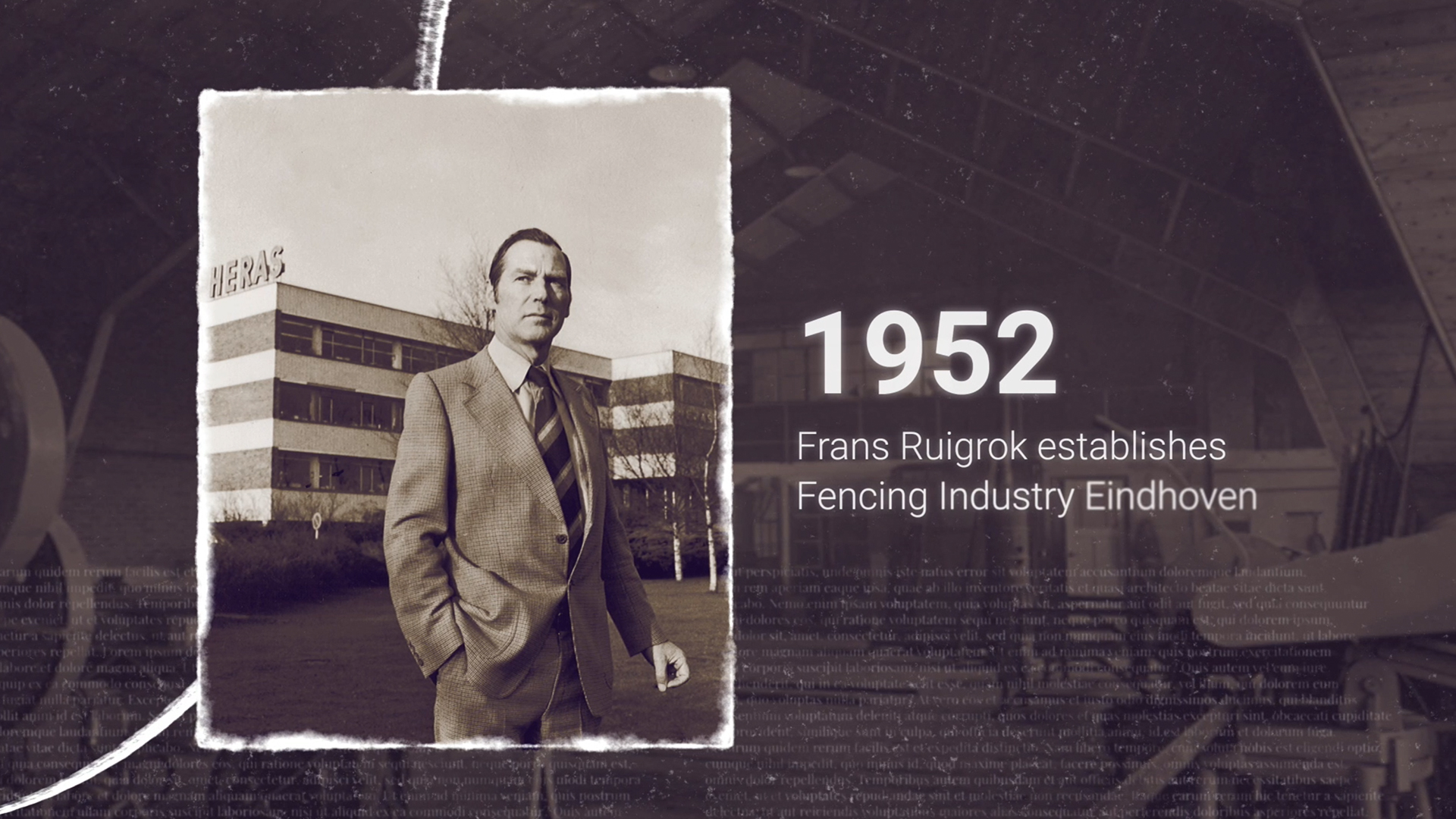 With only a few thousand guilders in savings, no materials or customers, but with a firm belief in the future, Frans Ruigrok started the company Hekwerk Industrie Eindhoven, now Heras, on 1 April 1952.

He had revolutionary ideas for standardising fencing, but customers were not yet queuing up in these early days. It was not until 1955 that the company started to prove its viability. By now, twelve people were on the payroll.

From pioneering to professional organisation

In the fifties and sixties, Heras made history by being the first to introduce a standard fence without a sloping beam. This was the start of a series of innovative fencing systems and components. The company also changed its name to Heras (HEk- en RASterwerk) Hekwerk. It is, as it turns out, a name that radiates solidity and inspires confidence.

After years of pioneering, Heras grew into a professional sales organisation in 1960. With a turnover growth of up to 40% per year and large customers like the Nederlandse Aardolie Maatschappij, Nederlandse Spoorwegen and Rijksgebouwendienst, the company became a major player in the fencing market.

Heras moved to Oirschot in 1966 and established itself at a strategic location with a favourable position on the road and waterways. The company prospered, but finding the right professionals remained difficult. However, Heras founder Frans Ruigrok was not easily deterred. After working successfully with subcontractors, he came up with the idea of making the assembly teams independent. They worked on their own account, but under the Heras flag. Fourteen years after its establishment, the company had sixty employees and a turnover of six million guilders.

In the 1960s, the first steps were taken across the border. Between 1968 and 1991, Heras opened branches in Belgium, Germany, France and England. But the company also installed fencing outside Europe, including in Saudi Arabia.

The development of products and processes

One of the greatest challenges in the history of Heras is the so-called security fence, as the ultimate protection for an object. In 1980, the company set up an engineering department that focused on the development of new products. Products that could hardly be called ‘fences’ anymore, given their complexity and the diverse wishes of the customers.

In 1990, Heras felt the time was right to supply access components to automate company entrances. The emphasis was no longer on the various fencing systems, but on the so-called turnkey approach. Using the Deltapoort as a basis, a product range was created to monitor, control and register the incoming and outgoing flows of goods and people.

Heras Production was being transformed from a traditional, stock-producing company to a modern company that produced exclusively on the basis of orders (on-order). It meant a completely new way of working and the introduction of a logistics control package.

Breakthrough in the industry

We owe a real breakthrough in the fencing industry to a major Dutch football club. Vandalism and violence at sports matches have been a major social problem for years. In 1991, Ajax contacted Heras in search of an alternative to normal fencing. Together with General Electric Plastics, Heras developed a transparent fence in 1994, replacing the section filling with plastic safety glass. The product was a breakthrough in the fencing industry.

Starting in 2016, Heras introduced several new products. After extensive research, design, development and testing, the products came to life thanks to the work of Heras’ own Product and Development department. These included the full line of speedgates, B700 turnstile, HVM and Saros barrier. All were available internationally for all countries where Heras operated.

At the end of 2021, Heras welcomed the introduction of revised CE standards for automatic gates. The stricter requirements were introduced to increase the level of security of access control systems across the industry. All products in Heras’ access control range met the requirements of the revised standard. Every effort was made to ensure that customers could rely on the products Heras manufactured and installed to meet all regulations. At Heras, throughout our history to this day and beyond we pay great attention to the safety of our products. From design and production, to installation and maintenance. Safety is the number one priority at Heras.

In 2022, Heras is a leading European provider of permanent and mobile perimeter protection solutions. We operate from more than 25 countries and employ more than 1100 highly trained experts.