Heras Country Marketing Manager Rebecca Hughes reflects on how England football fans without tickets for the Euro 2020 final, tried to storm Wembley Stadium to gain entry. Overshadowing a night where football was supposed to be coming home.

I knew that it was serious when Gary Lineker interrupted all the football chat with fellow BBC pundits, about the Euro 2020 final. After a slight pause he went onto break the news that a number of fans without tickets had tried to force their way into Wembley Stadium, to watch the match between England and Italy.

The scenes were shocking: scuffles between football fans and stewards, and at one point there was a police stand-off with a mob. Footage emerged from inside Wembley that showed fans fighting, apparently (according to the BBC) after some had forced their way through a door. 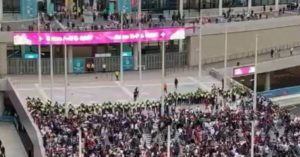 Statements quickly followed: the Football Association (FA) said it was “entirely unacceptable” and those involved were “an embarrassment to the England team.” And the Metropolitan Police said it had worked with security staff to prevent further breaches and also supported officials in ejecting ticketless fans.

A stadium spokesperson said: “There was a breach of security and a small group of people got into the stadium. We are now working closely with stadium stewards and security to remove these people. Anyone inside the stadium without a ticket will be instantly ejected.”

Having sat down to watch what was supposed to be a glorious night of football with my family on a Sunday night, my brain couldn’t help clicking into work mode. I began thinking about what went so wrong at Wembley – and how it got so bad that instead of giving Gareth Southgate’s boys their undivided attention, Gary Lineker and co. were momentarily reflecting on the ugly side of English football.

While the gut-wrenching disappointment of seeing England lose a penalty shoot-out is subsiding, the days after, all I can think about is the post-mortem that will be going on at Wembley. The stadium management team will be poring over every detail to identify what went wrong and how entry was compromised, and at some point a spokesperson will trot out the hackneyed line from the handbook of managing PR disasters that “lessons will be learned”.

Er, hello? It was only a couple of months ago that there was a huge lesson that owners of all sports stadiums should have learned from.

My colleague Karl Derbyshire from Heras wrote an article for the June edition of Football & Stadium Management magazine urging sports stadiums to review perimeter security ahead of next season after Manchester United fans broke into Old Trafford and invaded the pitch ahead of their Premier League clash with bitter North West rivals Liverpool. The match was postponed.

Karl questioned how a club like Manchester United could get it so wrong and gave three bits of advice around 1) exterior perimeter security, 2) forcing access doors and 3) unauthorised access.

He summed up by saying that as well as focusing on identifying potential weak points, stadium owners should also be reviewing the standards of their access control systems as a matter of urgency ahead of the start of the new football season.

Maybe if the owners of Wembley had heeded Karl’s advice, then I would have had less to occupy my mind during the match – but then again, it did take my mind off what was such a sad, so-near-but-yet-so-far night for England fans.

Rebecca Hughes is Country Marketing Manager for Heras in the UK.